Lobbying has been at the forefront of the political agenda recently – and especially since Lynton Crosby crossed the threshold of No 10. David Cameron has been under pressure to tackle it. His – and the Coalition’s – response was the Transparency of Lobbying, Non-Party Campaigning and Trade Union Administration Bill. 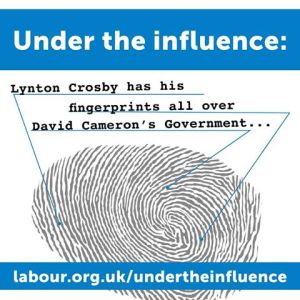 You’ll note that ‘Lobbying’ is not all this Bill deals with: the Tories and LibDems thought it would be a clever plan to include the Trade Unions and their activities in this – no doubt with an eye to stymieing Labour, not to mention diverting attention from the major questions facing the Tories over lobbying.

Well, the plan succeeded – though not perhaps quite as they had intended.

The TUC has called the resulting bill “an outrageous attack on freedom of speech worthy of an authoritarian dictatorship”.

The TUC fear the bill contains clauses which would make organising its 2014 annual conference a criminal offence!
In an interview for the BBC, TUC General Secretary Frances O’Grady said: “It’s an open secret at Westminster that this rushed Bill has nothing to do with cleaning up lobbying or getting big money out of politics. Instead it is a crude and politically partisan attack on trade unions, particularly those who affiliate to the Labour Party.
“But it has been drawn so widely that its chilling effect will be to shut down dissent for the year before an election. No organisation that criticises a government policy will be able to overdraw their limited ration of dissent without fearing a visit from the police.
“Of course not everyone agrees with TUC views and policies, but I expect there to be wide revulsion at this attack on free speech worthy of an authoritarian dictatorship.”

The TUC is seeking an urgent meeting with Cabinet Office Minister Chloe Smith to protest against the proposals.

Whether by accident or design, this Bill is a ‘dog’s breakfast’ – and it’s not only the TUC who fear its results.

Hope not Hate, a group which campaigns to counter racism and fascism, are also convinced that this Bill will severely hamper their activities in the year before a general election.

‘The restrictions are so severe that we would not be able to campaign against the BNP like we did so successfully in Barking and Dagenham in 2010.
By design or default, it is an attack on free speech and democratic engagement.
The Bill will:
• Slash the amount of money we can spend in the 12 months before a General Election by 70%. We can now spend only 2% of what the BNP can spend.
• See staff time and a range of other costs included in our campaign expenditure for the first time.
• Dramatically limit what we can spend in a single constituency.
• Bring our blog, magazine, research and even policy papers we produce during the year into our election expenses.’

You can read more about their assessment of the impact here and join their campaign.

By accident or design, this is a Bill which will have a crippling effect on political activity and free speech. Whether or not it will do much to curtail the Tory-party’s donors and their influence remains to be seen. What looks certain is that it will stop a whole range of political campaigns – including those against racism and fascism.

We might expect this of the Tories.
But if the LibDems don’t stand for free speech, what do they stand for?
Or have they jettisoned all their principles in Coalition?

‘The ability of people to join together and call for changes in the law or to influence politics in non-partisan campaigns is almost entirely swept away by this Bill. I will always try and uphold freedom of speech and association which are basic tenets of democracy. For a party that has always purported to uphold these same values I find it incredible that the Liberal Democrats could support this Bill.’
Alex Sobel, Labour Parliamentary Candidate for Leeds North West, (and for many years an Organiser for Hope not Hate).